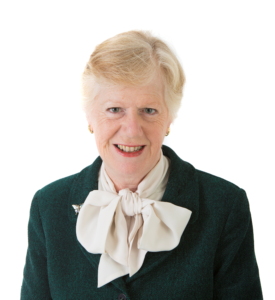 Elizabeth was Director, Research into Ageing (the UK national medical research charity) from 1990 until 2001 when she led the charity into full merger with Help the Aged (now Age UK). In 2000, she was awarded the BSRA Lord Cohen of Birkenhead Medal for Services to Gerontology, and in 2011 she was made an Honorary Life Member of the Society. In 2002 Elizabeth was awarded the OBE in the Queen’s Jubilee Honours for services to ageing research. In 2013 she received the award of Honorary Doctor of Science from the University of Brighton and in 2016 a similar Honorary Doctorate from Aston University.

As well as serving on the Development Board of BSRA, her voluntary activities include chairing the board of the Creative Dementia Arts Network. Elizabeth is also Honorary Director of Homeshare International, promoting the exchange of accommodation for companionship around the world.